THIS YEAR I PLAN TO COMPLICATE MY LIFE

January 15, 2020
I enjoyed the Marie Kondo thing. Really. (Is it over yet?). For example, I enjoyed the fabulous new pants and cosy wool sweater I acquired when my friend Emily, a violist in the Utah Symphony, Marie-Kondoed her closet. And I enjoyed all the articles people wrote in response to the Kondo craze, like the one in the Guardian by the writer who decided to ditch all her friends who didn’t spark joy…and then realized the only person left was herself. Oh, well. I especially liked the article/s reacting to Marie’s supposed claim about books, that nobody needs to own more than thirty (wait, people can actually live without hundreds of books?) which included interviews of people who loved their various huge, messy, beautiful libraries. I spent some time after that gazing at my own huge, messy, beautiful library, and tried to imagine whispering to each book as I loaded it into a box to throw away, “Thank you for your service.” And decided I didn’t actually have that much imagination. I didn’t get rid of anything. Though practically everyone I knew was down-sizing and getting rid of stuff. Even my kids. It was inspiring, in a distant, theoretical kind of way.

This year, I considered setting a New Year’s goal to simplify my life. But then I realized that one of the things I ended up doing which sparked the most joy, and which hadn’t even been an actual New Year’s resolution even though I started my quest in January, almost exactly one year ago, was learning how to make my own delicious sourdough bread. 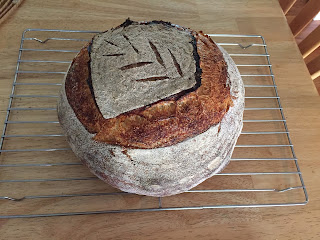 Which involved acquiring a lot of stuff. And which is about the most complicated way I can think of to acquire bread. Simple would have been to buy it. You can purchase decent sourdough bread at the bakery. It’s quick. You don’t have to plan to set aside most of a day to babysit dough. You don’t have to buy equipment. Buy, eat, toss bag, you’re done. Instead, I spent about six months researching recipes, watching YouTube videos, acquiring proofing baskets, lames, combo-cookers and cookbooks, driving 25 miles away just to buy good local flour, growing levain on my countertop, filling my fridge with wild-yeasty starters, thumping dough, and generally flailing around until I started consistently making good sourdough. And guess what? Thumping dough sparks joy. 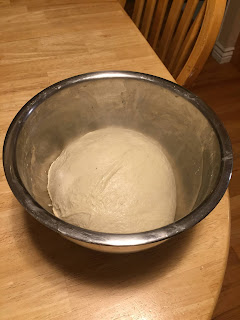 So does eating something crispy on the outside and fluffy and fabulous on the inside that you made yourself after six months of trial and bread-disasters, including many loaves that could have been mistaken for bricks, or doorstops.

So this year, I’ve decided to complicate my life in whatever ways I want. Like becoming a grandmother twice (thanks, my children!). Making more dinners at home so we eat together as a family more often. Collecting soft blankets and wool socks. And buying more books, even though my library is already overflowing the available shelf-space. Perfecting my whole-wheat version of sourdough bread, which still tends to turn out dense as doorstops about half the time. Making more things from scratch and walking to get places more often, to soothe my eco-anxiety and reduce my carbon footprint. Writing more novels, and working harder at my craft, because it’s not just fun, it’s satisfying to stretch for a level of quality you’ll never quite reach. Writing more blog-posts, even though I couldn’t tell Marie Kondo honestly that blog-writing necessarily sparks joy. I’ll also take on writing monthly blog-posts for my husband’s law blog, just because I want to help him out. I’m setting a goal to take the long way sometimes. And the slow way. The hard way. Thinking more. Talking to people in person, instead of just through text and Instagram comments.

The truth is, the easiest, simplest way to live is probably what we’re already doing with ourselves: fast-paced, drive-though, social-scrolling, throw-away. Letting technology do our living for us. Letting Twitter tell us how to think instead of doing that for ourselves. I know it sounds trite, but we all know none of that really sparks joy, or we wouldn’t be the loneliest, most anxious and depressed group of people in generations. Yes, it’s true, we buy too much, but sometimes the answer to the stress we feel isn’t simplicity.  Sometimes the path to a satisfying life is taking on more complication.
Although…I have to admit I was intrigued to learn that Elizabeth Warren’s secret to great skin at age 70 is lots of face cream and never washing her face…how simple would that be? Never wash! And OK, yeah, the truth is, I don’t feel like making bread today, or tomorrow, either, or cleaning out my storage room, for that matter…In fact, I’m tired, Marie. And I just had an epiphany: maybe the true path to joy is taking naps…We could call it Power Napping.

Why am I feeling a sense of déjà vu?